KeralaKerala.com
All about Kerala, a must visit paradise on earth

Kochi used to be called by its earlier English name Cochin, but now officially Cochin is Kochi. Kochi is the biggest city in Kerala with the main International Airport of Kerala is in Cochin. The Greater Cochin City includes Fort Cochin or Fort Kochi, Mattanchery, Kakkanad, Thrikkakara and Ernakulam. Cochin is the Headquarters of Ernakulam district in the State of Kerala.

Historically Kochi became prominent after the world famous ancient port Muziris or Patanam, now called Kodugallur, was destroyed by flooding of the river Periyar in 1340 AD. While the flooding buried Muziris with sand, the river opened up a new estuary at Cochin and creating the port of Kochi or Cochin. Kochi or Cochin is called the 'Queen of Arabian Sea'

For those interested in the ancient history of Kerala you should visit the Muziris Heritage Site, the spot of the archaeological excavations in the village of Pattanam in Kerala for the ancient Port City in Kerala called Muziris. Muziris was a very famous ancient port on the coast of India and traders from all over the ancient world like the Phoenicians, the Romans from the time of the Roman empire and Jews from the ancient Kingdom of Solomon, used to come to Kerala to trade through the port of Muziris. Christianity came to India when the Apostle of Jesus, Doubting Thomas landed in Kerala. Islam was brought for the first time in India through the port of Muziris and the first Mosque in India was built near Muziris in Kodungallore.

From 1503 to 1663, Fort Kochi was ruled by Portugal. The Portuguese rule was followed by that of the Dutch. The Dutch signed the Anglo-Dutch Treaty of 1814 with the English under which Kochi was ceded to England in exchange for the island of Bangka Island in Indonesia.

Famous Ports engineer Mr. Robert Bristow was brought to Kochi in 1920 by the then English Governor of Madras, Lord Willingdon. Bristow dredged the entrance to Cochin Port in order to allow larger ships to enter the port.

The dredged sand was used to create an artificial Island inside Cochin Port called Willingdon Island. Southern Naval Command of the Indian Navy has its headquarters in Cochin. The Port of Kochi has been recently developed into an International Container Trans-shipment Terminal call Vallarpadom. Cochin Shipyard is now famous since it has been awarded to build for the Indian Navy a huge Aircraft Carrier named 'Vikrant'.

The most important tourist spots in and around Fort Kochi are shown here.

What are Chinese Fishing Nets in Cochin

The Chinese fishing nets seen in many parts of Kerala, especially in Fort Cochin, are believed to have been introduced into India during the rule Kublai Khan in China, by Chinese explorer Zheng He. Now the only existing place on earth with these types of nets seems to be only in Kerala, especially in Fort Cochin. The best way to describe how these nets work is to imagine about a 30 feet (10 Meter) square fishing net fixed on a giant set of wooden spider legs. These shoreline based nets are dipped in water and then lifted out using long wooden, counter balanced, lever systems operated by about 6 to 10 men. The YouTube video makes clear how Chinese fishing nets work in Fort Kochi.

The Fort Cochin Chinese fishing are a very popular attraction for the tourists who seem to love the slow motion working of these nets and anxiously await the fish catch, to buy it off from the Chinese fishing net operators and get them grilled or cooked, marinated with Indian masalas, by the nearby street vendor who will cook the just caught fish to perfection.

Mattancherry Palace in Fort Cochin, Ernakulam District, Kerala was built by the Portuguese and presented in 1555 AD to Veera Kerala Varma , the King of Kochi. It is now popularly known as The Dutch Palace, since the Dutch carried out some repairs and extensions to the palace in 1663. Today it is a museum and open to the public. The portrait gallery of the Cochin Rajas and some of the best mythological murals (wall paintings) in India can be viewed. Other exhibits include ceremonial robes, headdresses, weapons, palanquins, furniture, etc.

The Mattanchery Palace is on the tentative list to be declared as a World Heritage site by UNESCO. The link to the site is http://whc.unesco.org/en/tentative lists/1092/ 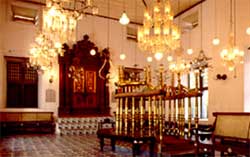 The Kerala or Malabari Jews was a rich trading community in Kerala during the middle ages, and they had world wide monopoly in the trading of Kerala Spices. The original synagogue was built in the 4th century in Pattanam or Muziris but must have been destroyed by the floods in the year 1340 and most of the Jewish community in Kerala then shifted base to the new port of Kochi.

The synagogue celebrated its 400th anniversary in 1968 and the signatories attending the celebrations included the Prime Minister of India, Mrs. Indira Gandhi.

This small church has historical significance in that it is the first Church in India built by the Portuguese, the first Europeans who came to India. The Church was originally built with wood in 1503, and later rebuilt with brick and mortar in 1516. The Portuguese explorer, Vasco da Gama, who died in Kochi in 1524 was originally buried in this church, but after fourteen years his remains were taken back to Portugal for a ceremonial burial there. The original grave of Vasco da Gama can still be seen in the St. Francis Church in Fort Cochin.

Efforts are underway by The International Forum for Cultural Heritage Tradition (IFCHAT) to get UNSESO to declare the St Francis church as a World Heritage Site. 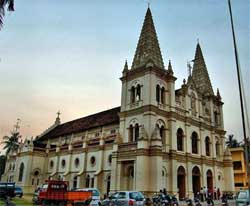 The Santa Cruz Basilica in Fort Cochin is one of the oldest churches in India and is also declared a Basilica by Pope John Paul II in 1984. The Portuguese got permission from the Kochi King Godha Varma and the construction of the church began on May 3, 1505, the feast day of the Holy Cross, and hence was named Santa Cruz Church. When the Dutch defeated the Portuguese, the Dutch used Santa Cruz Church as their warehouse. Later, when Cochin came into the hands of the British, they destroyed the original church buildings. One of the granite pillars of the original church can still be seen at the southeastern corner of the present Basilica.

The church with its twin high spires makes an imposing edifice. The main altar was designed by the famous Italian painter Antonio Moscheni. There are some spectacular paintings inside the church, most notably, one of the Last Supper which closely resembles the one by Leonardo da Vinci. The stained windows and paintings on the ceiling of the church are remarkable. 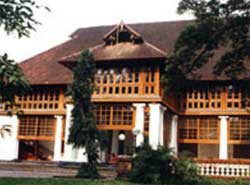 Bolghatty Palace is located on Bolghatty Islands, in Cochin, Kerala. Bolghatty Island is a small lovely island just three kilometers from Ernakulam city. Bolgatty / Bolghatty Palace was built by the Dutch in 1744. During the time of British rule, it became the residence of the British Governor. After Independence of India, it became a property of the State of Kerala, who has converted into a Heritage Hotel. The hotel's location is just heavenly and the service impeccable. The rooms are very large, the swimming pool is big and nice, has a fantastic restaurant, bar and an Ayurvedic Center. There is a 9 hole mini golf course and daily Kathakali performances. It is a 5 minute boat ride across the backwaters from High Court Jetty in Ernakulam city. It is also a short ferry ride from Fort Cochin, where you can see the Chinese Fishing nets, Jewish Synagogue, etc.

The link to the Bolgatty Palace Hotel is http://www.bolgattypalacekochi.com/ 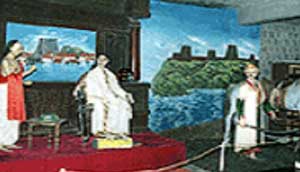 To quote from their website
"This 'live' Museum is not just a retelling of the past but is a Light and Sound show of three-dimensional visuals. 87 figures who shaped the history and culture of Kerala in the last two thousand years have been represented here in Light and Sound Tableaus. The story, from the Early peoples of Kerala to the modern age is interspersed with Social, Cultural and literary facets is a fascinating one.

The known history of Kerala is represented in 36 visuals which cover the sweep of history over the last two thousand years. These visuals are.........." More from http://artandkeralahistory.org/museum.htm 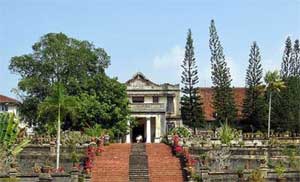 The Hill Palace in Thripunithura is the largest archaeological museum in Kerala. This palace was the official residence of the Kochi Royal Family and was built in 1865. The Cochin Royal Family gave the Tripunithura Hill Palace to the Government of Kerala in 1980 and then it was taken over by the Department Of Archaeology and converted into a Museum. Within the 52 acres of the Kochi Hill Palace, now there are an archaeological Museum, a Heritage Museum, a Deer Park, a Pre-historic Park and a Children’s park. Many categories of exhibits including paintings, murals, carvings, sculptures, manuscripts, etc. are displayed. Also displayed are the throne and the crown embedded with precious stones, many valuable coins, ornaments, majestic beds, etc. The museum also houses a large collection of archaeological findings including an amazing collection of plaster cast models of objects from Mohanjodaro and Harappa of the Indus Valley civilization of North India. The outlying grounds within the palace has many rare Medicinal Plants.

The map below from Booking.com is super helpful to compare Hotel rent in Kerala. These Hotel prices in Kerala are updated every hour by the world's No.1 hotel booking website www.Booking.Com and you can be assured of the best Kerala Hotel rates. The map is also very useful even if you just want to compare hotel prices in Kerala. Please make use of the Kerala Hotels map from Booking.com below.

You can use the following tool from Booking.com to search select and book hotels in Kerala or India or anywhere in the world